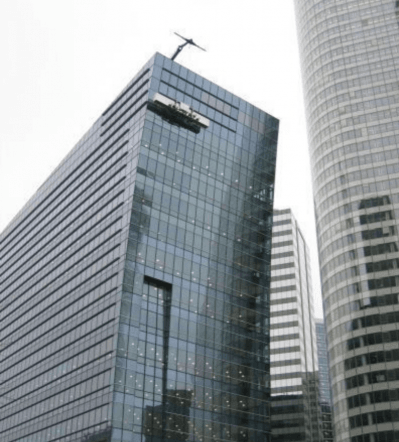 Skyman International applies continuous improvements to both its products, production systems and order processing. This is why they introduced QRM to the production department and offices too. Due to setting up collaborative teams, the lead times have become even shorter and internal operations have been improved even further.

Based in Boom in Belgium, Sky Man International’s innovative ambitions can clearly be seen from the successful transition it has made from being a traditional metal working company to becoming a specialist in the manufacture of niche products. Operating globally from two locations, the company has become a world player in the design and manufacture of maintenance cages for high-rise buildings and other inaccessible locations. Sky Man’s mission is as follow: ‘Facing the challenge of making working at heights safer with reliable access solutions.’

The company wanted to improve its production systems and stock management, but also achieve a more efficient collaboration between the various divisions that would result in more rapid movements through to the production department. Therefore management at Sky Man started searching for answers and participated in a masterclass on QRM organised by Sirris. On Sirris’ advice they decided to set up a ‘Quick Response Office Cell’ (Q-ROC) to enhance cooperation, communications, and lead times in order to make order processing more efficient. For a year Sirris provided on-site support for the establishment, operation and implementation of the Q-ROC. Through training, advice, and support.

One team, one department

Niels Goffin was the key person at Sky Man, who at that time was the Engineering Manager. He took the lead in the implementation of the initial Q-ROC. “Our various departments used to operate individually and issued assignments to each other. But because they are physically separated from each other, collaboration was not always perfect and sometimes information would go missing and time was lost. This is why we created a single cell consisting of ten people from the various departments who were made responsible for the orders, right from the customer’s initial demand, through to realization. People from the Sales, Engineering and Project Management departments were organised as a team at one specific location, which was a specially designed office for this cell. This resulted in having continuous, direct contact that in turn led to better communications and faster reaction times. The entire process therefore ran much more smoothly and rapidly. 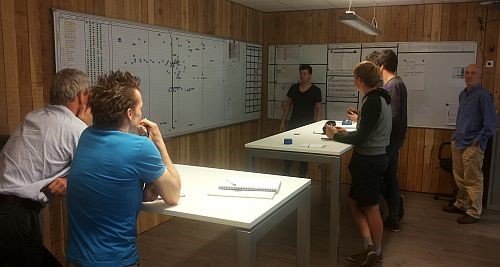 The initial Q-ROC at Sky Man began operating at the beginning of 2015. Things operate differently in the cell compared with how it used to be: Total coordination of all the projects takes place during two weekly stand-up meetings. These meetings take place in the presence of a series of boards that visualise all the project information. The status of each project is gone over at the meetings, actions are discussed then the boards are updated. The boards ensure that everybody is fully aware of the status of the projects.

Another interesting aspect is that the team, to a great extent, is ‘self-managing’. The organisational structure has been altered to allow this. Niels Goffin: “The actual collaboration within a specific team where members are actively involved, has been completely changed for some people, but it works. Problems, either internal or with the customers, are often solved without having to engage management thanks to direct consultation between departments. It’s a continuous process of learning and improving. As a result of the direct contact with each other, problems and reactions appear much more quickly. In order to deal with such issues appropriately, we have trained team members to become coaches that the employees can turn to throughout the day for advice and assistance.”

“From eight weeks to just a week and a half”

Based on the experiences with the first cell, another two office cells have been set up – one is the R&D cell and the other is the Quality Control cell. Three cells operate in the production department too. Niels Goffin: “Some changes happen gradually and other appear right away. Changes are sometimes only visible when we start to make comparisons: for example, we are seeing less stock on the shop floor in the production department. The racks there used to be much fuller. We’re now producing pretty well to order. Recently, a platform ordered by a customer took just one and a half weeks to produce, whereas earlier this would have taken eight weeks.”

Thanks to this new strategy we are not only managing very impressive lead times, but even more projects are being completed. This is easily seen on the boards that are also placed in the production department: “We go over the projects on the boards every single day. The more projects that are ready, the longer the list marked ‘Done’. This clear visualisation provides greater levels of satisfaction and a happier shop floor.”

The majority of the personnel are very positive about the new ways of working, and that’s essential for success each day. Niels Goffin: “The implementation of QRM is a complete process that is continuously being adjusted, revised and improved. For example the layout used on the boards has been changed a number of times in order to achieve the most optimal visualisation. The more that improvements are visualised, the more the employees are convinced, although it is still necessary to revise regular arrangements sometimes. In meetings we always take on board experiences and any contributions that are made. Those times when the boss told their employees how to work are long gone. We want to hear people’s ideas to help us work more efficiently.”

The next step in production optimisation involves making changes to the production department layout, so that we can achieve smoother flows and even better lead times.