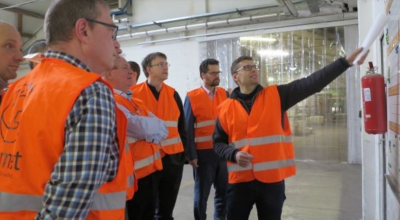 Houtbuigerij Desmet has already implemented QRM successfully in its production process and in the office environment. These interventions freed up space and led to the next step: setting up the new felt cell according to QRM principles. The major benefit from this was a much shorter lead time.

The company specialises in developing and manufacturing sustainable products from bent solid wood, plywood and felt. These products are custom-made and co-engineered for customers all over the world. The quality products with the most complex and varied shapes are used in design furniture, cinemas, theatres, offices and school interiors. A large part of the production consists of smaller series of new products that have never been manufactured before.

Houtbuigerij Desmet considers innovation to be of paramount importance in both its product and production process. Consequently, they have been working on optimisation for some time. This family-run SME has two branches: one in the West-Flemish town of Menen and, since 2003, a second facility Romania. Thanks to the close cooperation and good contacts between the two branches, the company has been able to combine the strengths of the two.

However, one problem was that the existing layout in Belgium, that was built around the needs of large uniform series, was not well suited for the new production process. Reason being, that it had been designed to facilitate smaller series with large variations. Despite this, it proved possible to reorganise the various departments and reduce the distances between the workstations. Analysing all the actions for each process gave better insight into the situation: non-productive organisational processes also seemed to take a lot of time.

In an earlier phase, unnecessary intermediate stock between production steps had been eliminated. By rearranging the layout of the company and reducing inventories, the company also succeeded in regrouping its activities into a smaller area. These changes freed up space for starting a new activity, namely the preparation of felt for furniture and interior elements.

Felt as a QRM pilot project

As the next step in the QRM process, Houtbuigerij Desmet aims to reorganise around specific market segments opposed to according to department. This makes it possible to expand production cells where the workstations are located close to each other, and the work is performed as a team. This enables direct communication and self-management.

The new range of felt products proved to be an ideal place to start. The hall was set-up as a production cell with a logical flow, in which five operators are active. The felt that is processed there is based on PET recyclate recovered from disposable plastic bottles, and is introduced in the form of non-woven mats (on large rolls). The mats are placed in layers in a mould. The mould is then heated and the felt layers are pressed into it. The melted fibres give the felt products their strength and shape. After the moulding process, the products are given their final shape on a six-axis waterjet cutter.

To keep the lead times in the cell short, a great deal of attention was paid to cross-training employees. This reduces the interdependencies and creates the flexibility needed for responding quickly to fluctuations in demand. In addition, it was decided to carry out one process in-house that had been outsourced and this resulted in time savings.

These actions made it much easier to plan the felt cell. Whereas previously people had to draw up a plan for each step, the felt cell now simply receives a list of the orders that need to be produced. It is now the felt cell workers themselves who direct the flow. Thanks to this production cell-arrangement and the corresponding adjustments to the flow, a lead time of 12 weeks could be reduced to just five days !